Home Our Blog How Trump Rescued Christmas
Share this page

A week appears to be a long time in the present trade saga. Last week, tensions between the US and China appeared to have reached an apex, with the US administration labelling China a ‘currency manipulator’ and proposed an additional 10% tariff increase on $150 billion of Chinese consumer goods, scheduled for the 1st of September.

On Wednesday a slight moderation appeared in the Trump administration’s previously bellicose stance; implementation of the proposed 10% tariff increase is being pushed back to the 15th of December.

The delay is an acknowledgement that the new round of tariff increases will adversely impact American consumers. American citizens are often referred to as the consumers of last resort and currently they are exhibiting good health – a good reason not to spoil Christmas for them. Indeed, President Trump stated, “We are doing this for the Christmas season, just in case some of the tariffs would have an impact on US consumers. So far, they’ve had virtually none”.

The admission by Trump that his latest stance on trade tariffs will cause pain for the American consumer is significant. Previously the administration had been resolute in proclaiming the tariff increases were structured to avoid consumer discomfort, because the goods targeted were not predominantly purchased by consumers.. However, by extending the scope of tariffs, the 10% increase is now, inevitably, levied on goods such as computers, mobile devices and toys. They are popular gift items, mainly manufactured in China, and any increase in cost from tariffs levied would have to be fully passed on by retailers via price rises.

The American Consumer’s propensity for spending is lauded as a powerful factor in the continued growth of the US economy. During the short period between Thanksgiving and Christmas (28 days), retail spending comprises around 30% of total annual retail sales, according to the National Retail Federation.

According to the Bureau of Economic Analysis (BEA) consumer expenditure is running at around $14.54 trillion per annum, which is a whopping 70% of all goods and services in the US. Most of this money is spent on housing and healthcare followed by non-durable goods like clothing and groceries. The balance is on durable goods like cars and appliances. 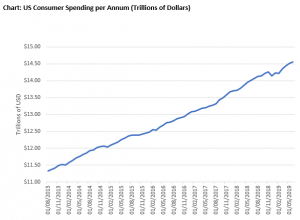 Source: Bloomberg and Bureau of Economic Analysis, data as of August 2019

It is self-evident that the delay enacted by Trump is with one eye on next year’s election cycle. By pausing, erosion of US Consumers’ purchasing power is prevented at least in the short-term. This will support continued economic growth and allow the present administration to claim their policies are not harming consumers. It remains to be seen if it will be enough to bolster Trump’s continued occupation of the Oval Office as the 2020 election looms.

The policy pivot by Trump is something we are all getting accustomed to.

For now, US consumers, companies and economic growth are the key beneficiaries of the roll back, at least in the short-term.

What happens next is anyone’s guess.